The first conflict on which YPI has placed its focus on is the longstanding Israeli-Palestinian conflict. In the case of the Israelis and Palestinians half of the population is under the age of 25. However, until now the input of the youth in the peace process has been limited. Students from the Netherlands with a shared trust that the answer to conflict resolution needs to involve the youth, joined the YPI Board to organize a peace conference in 2014 in The Hague, on the Israeli-Palestinian peace issue. Read below a summary of our activities over the past years.

2014: Establishment of the initiative and first conference

In October 2014 seventeen young adults, five Israelis, five Palestinians and seven other young leaders from the rest of the world (Korea, Cyprus, Northern Ireland, the United States and the Netherlands) gathered in The Hague. They spent a week touring the Netherlands and getting to know each other, meeting ambassadors, mayors and hundreds of enthusiastic school students in the process. Following these initial days, they gathered for a number of days at the Netherlands Institute for International Relations, think tank and diplomatic academy Clingendael, to work on their own statement on the possibilities for permanent peace between the Israelis and Palestinians.

The result of that conference is the document “Our Common Future: Paving the Road for Sustainable Peace”. This sets out a bold and realistic image of the future and highlights common points for both Israelis and Palestinians. It is intended as a starting point, and since that time the Youth Peace Initiative of Israelis and Palestinians (YPIPI) has been created to continue the great progress achieved in the Hague.

2015: continuation of efforts in the Middle East

When the Israeli and Palestinian participants met in October, a belief emerged that a solution to the long-running conflict is truly possible. The mutual understanding, trust and friendship created during the conference built the base for this belief. The participants have agreed to continue the efforts of the YPI and progress their work on the outcomes of the peace plan ‘Our Common Future’.

In the spirit of ‘Our Common Future’, the Israeli and Palestinian delegates had scheduled meetings in Jerusalem to continue creating a platform for dialogue and a sustainable solution for the Israeli/Palestinian conflict. These meetings eventually lead to a new summit in The Hague in May and June 2016.

From Sunday 28th of May till Friday the 3th of June 2016, YPI organised a new conference. Our expanded – with regard to the 2014 conference – Israeli and Palestinian delegations came to the Netherlands, where they spent an intensive week of dialogue on several sub-topics of the Israeli-Palestinian conflict and how youth could bring positive change. Click here to read more!

One of the week’s results is the document ‘Our Common Future II: Paving the road to sustainable peace’  The documents’ opening lines carefully explain their experiences.

“Despite the gruelling, frank, and at times deeply challenging dialogues, the participants were able to present a document including a promise to continue the negotiations and listing the collective responsibility on both sides. By acknowledging responsibility, the sides do not admit that they are at fault – they do, nonetheless, acknowledge that these are issues that they must answer for as members of their own societies. […] The participants agreed to move past their differences to discuss and design programmes to build mutual trust between Israelis and Palestinians. Their programme proposals, aimed at trust-building and transmitting tolerance, are included in ‘Our Common Future II.”

2017 and 2018: Continuation and extension of the initiative, a new conference

The  document of the 2016 conference itself is not the only result of the conference week. Maybe even more important are the non-tangible results, the trust, respect, and friendship that were built. These three elements form the driving forces for the willingness to continue with the initiative. The delegations returned to the region after an insightful and intensive conference. Although the road is long and hurdles continue to emerge, the participants continued their pledge to bring peace to the region.

In February 2018 the Youth Peace Initiative organised their third conference in the Netherlands. Curious for the outcome? Check out the amazing sketch that was made during the discussions, dialogues and activities our group had, or find ‘Our Common Future III’ via this link.

This January, YPI’s first year-programme kicked off. After the recruitment process, six new young Israelis and six new young Palestinians have joined the Youth Peace Initiative. They are young leaders in their communities, passionate about peacebuilding and hopeful for a better future. Throughout the year, YPI will facilitate meetings for dialogue, workshops and other activities to build their leadership skills and explore the roles they can have in their societies. Every six weeks these meetings will take place. In addition, field trips and other activities will be organised by the group alongside the mandatory meetings. For more information about the Young Leadership Experience, you can find the information booklet here! 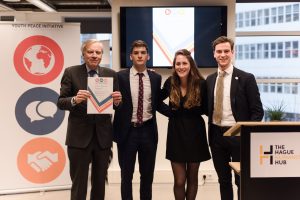 The applications for the Young Leadership Experience 2020 have closed. In January the newly selected delegation will commence their programme.

Outreach in the Netherlands

Beside stimulating the peace talks in the Middle East, the YPI aims to involve the youth of The Netherlands in its mission to bring peace. Through YPI-Lectures both university and high school students will be informed, can debate the latest developments of international relations and will be taught the methods of peace building through workshop skills.

Stay tuned for updates on events!